skip to main | skip to sidebar

The Joys and Pains of Being an Indians Fan 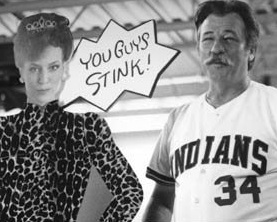 I haven’t always been a die-hard Cleveland Indians fan.  As a kid in northwest Ohio the ‘80s, I rooted for the Tribe, but loved the Mets (and the Broncos … and the Pistons).  I was the ultimate front-runner – something I’m not terribly proud of today.

Nevertheless, as I grew and matured, I found myself drifting away from the contenders and cheering for the local boys.  In the summer, that meant Indians baseball – those lovable losers on the lake.  My dad is the ultimate fan and it was hard not to absorb at least some of his die-hardedness when so many of our summer days involved sitting in the back yard listening to Herb Score merrily slur his way through countless 90+ loss seasons.
Of course, being a Cleveland sports fan requires an ample amount of self hate.  No Cleveland team has won ANYTHING in almost 50 years.  And, for the Indians, it’s been 65 long seasons since they hoisted a World Series banner.  They’ve come oh so close in recent years (’95. ’97. ’07.), but always ended up breaking our hearts which, in some ways, hurt more than the previous decades’ consistent mediocrity.

The past two seasons, however – with their scorching hot starts, disastrous middles and meaningless finishes – have, I’m sure, tested even the most loyal allegiances.  They have manifestly demonstrated what it means to be a Cleveland fan.

To me, it boils down to a few simple tenets.  I call it the Six Stages of Indians Fandom.  It’s a basic set of principles that can properly temper expectations and emotions for even the most novice Tribe fan through the slog of 162 games – with its highs, lows and everything in between:

Stage 1 (April) – Cautious Optimism: “Hey, we looked good in the Cactus League and are off to a solid start. We’ve got a few holes to fill, but I like what I’m seeing!”

Stage 3 (June) – Wavering Hope: “Oof, rough start to the month, but we’re still leading the division.  If we can just play .500 ball the rest of the way, we should coast into the Playoffs.”

Stage 4 (July) – Rage: “How in the hell did we limp into the All Star Break on an eight game losing streak!?  I mean, seriously, how many f***ing saves can we blow in one month!?  Our closer’s an All Star for crying out loud!”

As of this writing, the Indians are 2-0 and looking to sweep their season-opening series in Toronto.  Will this be the year they break the cycle?  I'm cautiously optimistic!
Posted by Unknown at 12:51 PM