skip to main | skip to sidebar

Somewhere in America right now, a kid is brooding.  His girlfriend is cheating on him.  He just got fired from a job he hated.  His grades are suffering and his teachers are breathing down his neck.  The more popular kids pick on him and laugh at him.  He’s at his breaking point, ready to end it all.  But, he wants to go out in a blaze of “glory.”  Maybe get a rifle and take out a few antagonizers with him.

That hypothetical situation has been stewing in my head all week, as I listen to calls to arm teachers, loosen restrictions and proliferate guns to more people.  The rationale being that more guns means more safety, e.g., a more heavily armed populace increases the likelihood that someone would be present and able to prevent a shooting.

While I see the individualistic logic behind a theory like this, it’s terribly flawed on a global scale.  In fact, it’s so flawed, that one of the key arguments in its favor actually works against it.

The gun advocacy crowd argues that new restrictions and regulations on certain weapons (semi-automatics, large volume magazines, etc.) won’t make a difference because “the bad guys will still find a way to get them.”  That’s true to an extent, but it’s also a very specious claim for a couple of very simple reasons:

Going back to my first paragraph – there are many more Dylan Klebolds and Jared Loughners and Adam Lanzas in the world.  There always will be.  They’re deranged, impulsive and think violent thoughts.  All they need is something to “flip the switch.”  We’ve all probably crossed paths with someone like this in our lives (maybe at some point, some of you were that person but thought better of lashing out).  I, for one, would prefer that we do everything possible to make obtaining weapons of destruction a real pain in the ass for them.  If nothing else, it would give them time to ponder the reality and consequences of their actions, and maybe make them realize the folly of their radical thinking, or at least decide it’s just not worth the effort.

Isn’t jumping through a few extra hoops and waiting a few more days to get your new hunting rifle worth at least that much?
Posted by Unknown at 12:57 PM No comments: 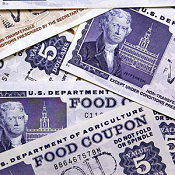 When I was born, my father was a broke college student and my mother worked at one of the campus cafeterias.  Upon dad’s graduation, he accepted a low-paying teaching job at a small rural high school while mom took a part-time job at the local bakery.

To put it bluntly, we were poor.
Not dirt poor.  We were never left wanting for food, clothing or shelter.  But, in those early belt-tightening days, mom and dad couldn’t necessarily guarantee all three without a little assistance.
So they did what millions of Americans are forced to do every day.  They swallowed their pride and asked for help from the government.  They went on food stamps and, consequently, were able to maintain a healthy family unit through those first few difficult years.
We were, as some might put it, part of the 47%.  The takers.
Fortunately, our dire financial circumstances didn’t last long.  When I was a toddler – shortly after the birth of my siblings – dad got a nice pay raise when he was hired at a bigger school (and a few years later at the local community college) and mom went to work at an optometrist’s office in town.
My parents were able to get off the government dole through ambition, determination and hard work.  By the time I finished high school, we were living the definition of the middle class American Dream, complete with a nice house, annual family vacations and plenty of other comforts that many people are forced to do without.  All in all, we represented a very American ideal – we were a self-made success story.
But, my folks weren’t really 100% self-made, were they?  Without a taxpayer-sponsored safety net to help kick-start their future, I shudder to think what might have happened to our family.  Would we have been able to ever climb out of poverty?  Would my brother and sister have ever been conceived?  Would we have had chances to play sports, go to Disney World and eventually graduate from college with minimal debt?
The answers to all those questions is, of course, “who knows?”  But, I think it’s safe to assume that my mother and father would have had to sacrifice at least some of the luxuries they were able to provide.  And, I can say with some certainty that I would not have the opportunities I have today if it weren’t for the help we received way back in the late ‘70s.
I share this because I hope it helps at least a few skeptics connect the dots.  That it helps them realize the average person collecting welfare, food stamps, Medicaid, etc. is not a lazy freeloader, but more likely someone who has fallen on hard times and may not be able to get back onto his or her feet without a little boost.
Are there people who game the system?  Sure, and they need to be held accountable.  But would you take away from the many who aren’t to punish the few who are?

Posted by Unknown at 8:53 PM No comments:

"I’m speaking up for him and his 1st Amendment rights and anybody else who would wish to express their not anti-gay people sentiment, but their support of traditional marriage..."
- Sarah Palin, defending Dan Cathy, President of Chick-fil-A

Please study up on the Constitution.  The First Amendment protects individuals from being LEGALLY punished for their speech.  Last time I checked, no one from Chick-fil-A has been arrested for speaking up against gay marriage.

If anything, this is an ideal case study for what makes our democracy great.  Dan Cathy can say basically whatever hateful things he wants with NO fear of government reprisal (the deal with idiot running Boston is a conversation for another day – his is the kind of over-the-top reaction that makes liberals look bad).  Conversely, consumers are well within their rights to choose not to do business with a company that attempts to undermine a lifestyle they support.

Think about that.  A captain of industry speaks his mind freely.  Some agree with his stance, some do not.  Those not in agreement campaign to boycott his business, while many who agree go out of their way to show support.  Ultimately, the business will succeed or fail based not on any actions of government, but on the feelings of consumers.  It’s the perfect marriage of democracy and capitalism which – if I remember my elementary school Social Studies correctly – are the two primary foundational principles upon which our Union was established.

In summary, Sarah, if you want your political views to be taken seriously by anyone outside the fringes of the Tea Party, please find yourself an old Civics textbook and start reading.

Sincerely,
All of us who apparently understand the Bill of Rights better than a former Vice Presidential candidate
Posted by Unknown at 5:24 PM No comments: 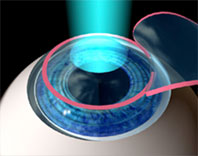 At some point in the second grade, I started periodically coming home from school with blinding headaches.  I can remember writhing and crying in agony on my parents’ bed praying for the pain to stop.  I can be a bit of a drama queen, so I’m sure I overdid it significantly, but still, it hurt like hell.

Over the course of the school year, these episodes became more and more frequent.  It didn’t take Dr. Oxley, the family optometrist, too long to realize that a combination of a desk in the back of the classroom and rapidly degenerating vision were causing the grief.  On the second to last day of school, I put on my first pair of glasses.  Oversized with bulky, brown plastic frames – they were NOT a model of high fashion.

For the next 28 years, my life became a never-ending cycle of increasing prescriptions and thicker lenses, then bifocals, then soft contacts, then disposables and, finally, in my early thirties, when my eyes could no longer handle the strain of the slick ribbery discs anymore, it was back to glasses nearly full-time.  While my latest pair of specs are a bit more stylish than those of 1984, they still provided all the same dilemmas – smudges, grimy noseguards and poor grip in any sweat-inducing environment.

But that all started coming to an end on Tuesday, March 13, 2012, when I placed a call to the folks at Clear Choice Custom LASIK Center (along with a few other clinics) to inquire about corrective surgery.  You can imagine my surprise when they were able to get me in for a pre-op consultation two days later and then scheduled my surgery for March 23 (three days ago as of this entry).

On the day of my surgery, I woke up with 20/475 vision and by 2:30 p.m., was 20/15.  Walking out of the clinic that afternoon and being able to read the street signs was one of the most euphoric experiences of my life.

So here comes my sales pitch, directed primarily at any of my 18 loyal readers who are considering LASIK surgery:

Here are a few of the things I did this weekend that I have literally NEVER been able to do without the aid of corrective lenses:
I spent the better part of Friday night lying in bed staring at a door frame outside our bedroom, admiring the sharp, crisp edges and angles.  Dorky?  Yes.  But don’t knock it until you try it.

Nevertheless, I don’t want to totally oversell it, so I’ll lay out some of the pros and cons I’ve experienced to help provide a more balanced viewpoint:

Cons
Pros
You’d be surprised at how drastically that one Pro outweighs all the Cons.

So, as I said, do it.  But don't be afraid to shop around.  There are clinics everywhere that provide the service.  I only have three pieces of advice:
I’ll close by recommending that you at least consider the folks at Clear Choice – at least if you’re in Northeast Ohio.  They’re friendly, they’re experienced and their clinic includes a little “café” that is always stocked with complimentary fresh drinks and cookies.  Here’s how you can find them:

Trust me, once you make the decision, you’ll “see” why I’ve made such a fuss. (nyuck nyuck)

Posted by Unknown at 8:50 PM No comments: